Today is a big day for the PS3 gamers and fans of the Metal Gear Solid franchise, as today is the release of the patch many have waited for … the patch that adds a trophy system onto the 4th game of the franchise.

Metal Gear Solid 4: Guns of the Patriots was released a long time ago, 5 years or so I do believe as I was in high school when it was released! It’s amazes me how it’s taken them 5 years to add trophies to the game, as I know a lot of people who’ve wanted trophies from the beginning. I suppose it’s better late than never. Maybe it was the success of the MGS HD Collection and its trophies that inspired Konami to finally add those coveted trophies. Who knows… 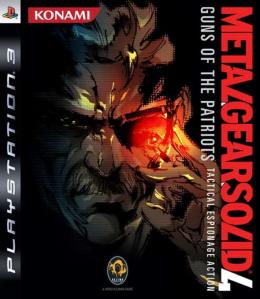 I’m unaware of the what the trophies themselves are but I’ll find a link to them so you can see:

I’m not a huge PS3 player, but I am an achievement/trophy hunter (on the Xbox side) so the addition of trophies may just inspire me to clear some space on my already packed PS3 hard drive to gather as many of these trophies as I can!

I’ve been playing Fallout 3 recently. I got the Game of the Year edition which came with all the DLC packages. I’ve been exploring the extra content and was completing a mission called The Pitt on Sunday. Part of the mission is finding ten “steel ingots” in a place called the Steelyard. You are stripped of all your weapons and armour for this and the Steelyard is full of quick moving enemies. You have to make-do with what weapons you can find. As you can imagine it is therefore something you want to complete quite quickly. But there is an achievement (or trophy if you’re playing on a PS3) is you go above and beyond the ten ingots requirement and find all one hundred of them. Now, I have a terrible problem with leaving any stone unturned when playing RPG’s – if you can collect it or complete it or kill it then I feel strongly compelled to do so. But as I was running around picking up bars of steel for 20 gamer points I couldn’t help starting to feel a little bit stupid. What was the fun in this? Why was I really doing it? Are 20 gamer points and a special armour reward worth me playing out such a repetitive task?

Sony and Microsoft demand that every game released on their consoles contain external achievements/trophies. We’ve become pretty used to them. We likely all know people who will plow through mediocre games simply in order to get them rather than for any enjoyment of the game itself. I do wonder if they dull the impact of gaming. Are we playing because we really want to complete that side-quest or are we doing it because we want the extrinsic rewards? I remember playing Final Fantasy XII and finally, after a 7 hour battle, taking down the superboss Yiazmat who had 50million HP. I didn’t do it for a trophy (there was none) or a reward (there was one but I didn’t care for it) but because I really, really wanted to take that bastard down. If FFXII had come out on the PS3, would more people have been prepared to slog through this long and tough battle if they had a trophy to show off?

I also wondered if achievements and trophies effect multiplayer games. Take Left 4 Dead for example. There are a number of achievements that involve doing things such as collecting a gnome and carrying it through to the end of the game or only using pistols. Now, these type of achievement can be great fun – I’ve got both those achievements myself and had a blast doing so – but they can really effect playing online. You can end up with someone on your team that is more interested in obtaining a particular achievement than in helping your team stay alive. The game itself doesn’t encourage anyone to carry a gnome rather than rescue an incapacitated survivor but the external motivator of the achievement does! It can ruin the game for other players when you are left to die by someone chasing 10 gamer points. Perhaps these sort of achievements should only be available for offline play?

Basically, I am wondering if these external and relatively pointless rewards erode what makes playing video games gratifying. Also, do they encourage developers to include repetitive or annoying tasks in their games?

To Trophy or Not

So I’ve got a PS3 now which means trophies. Anyone can look and see just how poor my Xbox 360 gamer score is.  Racking up the points really isn’t a big deal to me. I know there are plenty of gamerscore fanatics out there, a friend of mine is one. He’s not happy if he doesn’t get every single point out of an Xbox game. He’s even been known to borrow/rent crap games jsut to get the easy score out of them.

I understand the fanatic competitiveness that having the highest score on a leaderboard. That’s essentially what the Xbox gamerscore has become, and everyone wants the highest score.There’s even functionality within the Xox 360’s interface to compare your score with your friend’s.

The PS3 has trophes. It’s a similiar system generally speaking, but you don’t really have an overal ranking gamer score like on the Xbox. The caveet is that not all games have trophy support, be they old or new. Why developers aren’t releasing games with trophies, I don’t know. It can’t be that difficult to put them in since they have very likely done the achievements for the Xbox. What do I know though. Maybe it’s hard to do.

Here’s what I don’t understand though is this. Why the hell would someone decide to completely not buy a game that they are really interested in just because there are no trophies? I jsut don’t get that. If you really like a game why would you not jsut play it? Why are trophies so fucking important that you’d deprive yourself of something genuinely fun that you want to play?

Anyone who knows me will know that this hasn’t come from nowhere, but something has gotten a hair up my ass. This time it was numberous comments on the news post on PS3Trophies.org regarding the announcement of Fallout 3 getting trophies.  Amid the bullshit are many comments regarding the purchase of the game vs it having trophies. One comment even said they had no plans to buy it, despite really wanting to play it, until this announcement was made.

Fuck gamerscore and trophies. Play games because you want to.