So, the Xbox 360 died a death. Red Ring of Death after 5 long years of service. I know, I must have the oldest Xbox 360 ever.  Electronics lasting 5 years isn’t unheard of if it’s quality tech. Xbox 360s though are lucky if they last a year. I’ll let you draw your own conclusions. Both my PS1 and PS2 still work and the PS1 flew several thousand miles with me when I moved.

Now I’ve always said that if my 360 got an RRoD I’d just get rid of it and that would be that. I would have done just that too if it hadn’t chosen to do it in the middle of playing Fable 3. Oh yes of course, it chose to die while I was just over half way through the game. Not before I’d gotten the game or after I’d finished it, but smack fucking in the middle. This of course meant I couldn’t just say to hell with MS and the Xbox 360. Nope, needed a replacement. Somehow.

So we have 3 options. Pay the £70 to send it in and have them “repair” it. This option is otherwise known as them sending me a refurb of someone else’s RRoD machine that will RRoD on me again at some point in the future. The second option is for us to find the cash and buy a new one that not only has a bigger hard drive, but it’s also black. This option costs £200.

Of course the third option comes down to how much effort I really want to put into all of this. My final option is that I could call up their Customer Service department, yell at them and get all obnoxious American on their asses and get them to “repair” it for nothing. Yell loud enough and long enough and you’d be amazed what can happen just so that you’ll go away.

You can guess which option we went for; yes, we got a new one. 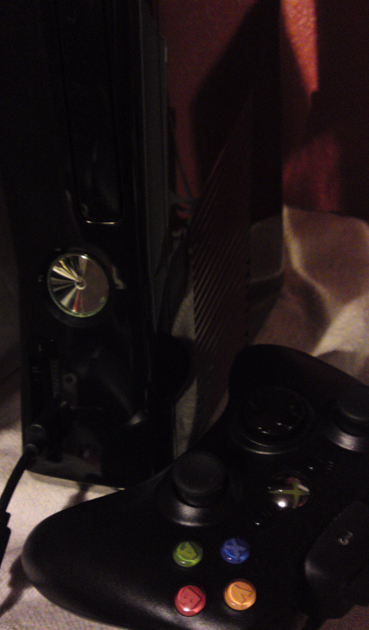 This actually brings me to the whole reason I’m here writing this. I have done the one thing that I really really hate having to do, I bought another Xbox when mine failed.

Microsoft boast massive numbers of units sold, but just how many of those unit sales are actually from people buying multiple consoles due to getting an RRoD? I know several people who have bought 2-3 Xbox 360s because they’d gotten an RRoD. The numbers are inflated by these multiple sales.

These newer ones are supposed to be less prone to getting the RRoD, but by now shouldn’t Microsoft have this issue fixed? Shouldn’t such a major fault not be allowed out in the public domain? Obviously not, but it has survived and flourished and people keep buying them

Guess I’ve no room to talk now. I still resent having to do it when I shouldn’t have had to. Sure I could’ve just paid the £70 to have it fixed. Yea it was out of warranty, but why should I be paying for something that is a known fault in the hardware and wasn’t caused by any inappropriate use of the machine? Any other company would have been forced to recall, but somehow Microsoft has managed to keep selling and selling and selling.