Back from Vacation (and getting busy!)

This past week I was out, so my regular updates naturally ceased for a short while, as did my gaming. Now that I’m back, I have a lot to look forward to! Right before I left, my boyfriend lent me Prince of Persia: Sands of Time for the PS2.

I’ve actually never played any of the Prince games, but I’ve always heard very good things about them. Someone gifted me Prince of Persia: Warrior Within a few years ago as well, but I realized it wasn’t the first game and have thus never played it. Another thing is I watched a friend of mine play through maybe 20% of the most recent Prince game (somewhere in the middle chunk of the game overall) on his laptop, so I had some familiarity with Prince by the time the movie, Prince of Persia: Sands of Time came out a few weeks ago. I recognized the references the movie made to the games, but realized it came a little short. My boyfriend also filled me in on a few storyline points that the movie changed, all the usual stuff.

I played through just the first stage or two (I call them stages, between the save points. You can call it whatever you like.) before going away on my trip. The visuals still hold up very well, I really like all the controls, and the sound track is amazing. Granted, the music in the actual game itself does not sound that good; it’s actually quite choppy and just too compressed. Listening to it from the soundtrack, though, is very pleasant. I really enjoy puzzle games, so I’ve been having a blast with this one!

And when I got home, it was my birthday. 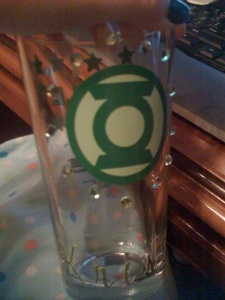 Guess what my wonderful boyfriend gave me? Batman! Game of the Year version Batman AA. I’m thrilled, because I’ve been wanting to play that game for a long time and never really found a good copy at a good used price in the local shops, so I just never bought it. Elsewise, I decided to wait on that game since I’ve been playing other things. Once I’m done with the first Prince of Persia game, I’ll tackle Batman before I move on, I think. He’s my favorite superhero. I actually got 2 awesome gifts from him. Besides Batman, he found this great Green Lantern tumbler and decorated it for me.I know it’s naught to do with gaming, but I still would like to share!

Note that it’s all studded up around the logo and whatnot. The stars that are viewable are actually in the back around the word “WILL”. The bottom has my name sticker’d on. In my next post, I will show everyone what I do to super hero t-shirts and why my friends call me Fabulous Batman.  =)

This entry was posted on June 21, 2010 by Kristina. It was filed under comics, gaming, PS2, PS3 and was tagged with batman, birthday, game soundtracks, Green Lantern, Prince of Persia, PS2, PS3, Puzzle Games.